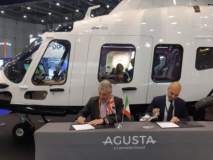 Geneva, 23 May 2022 - Leonardo’s leadership in the world’s VIP/corporate multiengine helicopter market continues to grow with new orders announced today at EBACE 2022 (Geneva 23-25 May), including three AW109 GrandNew light twin, one AW109 Trekker and two AW139 intermediate twin helicopters with deliveries in UK, Italy and Germany in 2022 and 2023.

Official distributor for UK & Ireland Sloane Helicopters ordered three AW109 GrandNew's with deliveries expected in the second half of 2023, adding to the three aircraft of the same model purchased in early March. Leonardo has a long-established presence as the number one manufacturer of multi-engine VIP helicopters in UK and Ireland. This long-term success was evidenced through the launch of the partnership with local company Sloane Helicopters in 1995, which became the sole distributor of Leonardo VIP/corporate helicopter in the UK and Ireland. Under this collaboration, more than 90 Leonardo commercial helicopters have been delivered to operators and private users in the UK and Ireland.

Jeremy Awenat, Managing Director Sloane Helicopter, said “We are very proud to have been Leonardo’s UK and Ireland Distributor and Service Centre for the past 27 years, with a close partnership that is further strengthening. Sloane is focused on delivering 12 new aircraft to our customers in the next 18 month period, consolidating Leonardo’s position as the leading helicopter manufacturer in the VIP/corporate market.”

This latest contract confirms the success of the AW109 series in the region as Leonardo and Sloane promote the recent launch of the new Agusta VIP brand in the region, also presented at Punchestown Festival in Ireland. The AW109 GrandNew success is evidenced by the introduction of a brand new aircraft into the Saxonair fleet under an agreement with Sloane and announced at EBACE, further strengthening its charter operations already carried out with GrandNew and AW119Kx aircraft. Established in 2007 and headquartered in Norwich, Saxonair is a prime player in the delivery of aircraft and helicopter charter services in UK and Europe. Nearly 260 AW109 GrandNew light twins have been ordered in the global market out of a total of over 1700 AW109 series units sold in years for all missions, confirming the AW109 as the most popular aircraft in its class thanks to unmatched performance, cabin space and technology. One AW109 Trekker in VIP configuration has recently been sold to a private operator in Germany marking the introduction of this model in this country, with delivery planned at the end of this year.