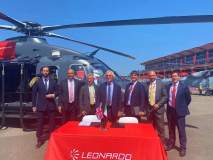 Farnborough International Air Show, 20 July 2022 - Leonardo’s continued success in the UK and Ireland helicopter market expands as its regional distributor, Sloane confirmed renewal of its Distributor Agreement for the 2022-2024 timeframe with the company at the Farnborough International Airshow on 19 July. The agreement covers the AW109 GrandNew, AW109 Trekker and AW169 types, and foresees a minimum of seven new helicopters  purchased during the 2022-2024 period. Under this new Distributor Agreement an AW109 GrandNew has been signed for. This new contract expands the total helicopter orders by Sloane Helicopters this year to seven, all scheduled for delivery within 2023, and this clearly demonstrates the strong market demand in the UK for the class-leading light twin type.

David George, Chairman of Sloane Helicopters, said: “We are delighted to continue and further develop our close partnership with Leonardo. The new Agusta branding focusses on an enhanced VIP customer experience. Combined with the helicopters’ leading performance and safety characteristics, along with excellent support services, the Agusta helicopters are the clear leader in the VIP/corporate sector.”

Nearly 260 AW109 GrandNew light twins have been ordered out of 1,700 AW109 series units, confirming the AW109 as the most popular aircraft in its class thanks to its unmatched performance, cabin space and technology.

The Distributorship Agreement has provided customers with continued benefits by dramatically reducing delivery times and providing customers with product expertise and a full range of support packages, which also helps Leonardo to maintain its position as leader in the executive/private transport market in the UK and Ireland, among other applications. This has been further reinforced following the launch of the new Agusta VIP brand in late 2021.