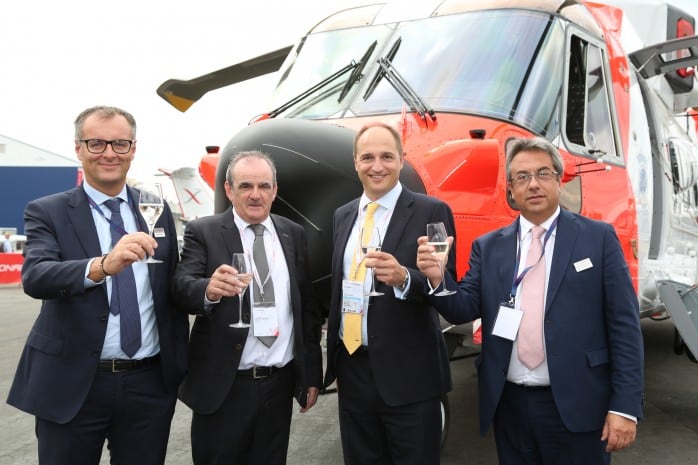 Farnborough, 18 July 2018 - Leonardo and official distributor in UK Sloane Helicopters (Sloane) announced today that QME Mining Equipment Ltd (QME) of Ireland, a leading company in the supply of complete solutions to the Mining and Tunnelling industries worldwide, has signed a contract for an AW109 GrandNew helicopter. The aircraft will be used to perform VIP/corporate transport operations with delivery expected in early 2019. The announcement was made during an official ceremony held at Farnborough International Airshow today.

QME, with decades of helicopter ownership experience, selected the AW109 GrandNew after a thorough and rigorous evaluation. The order marks the first AW109 GrandNew in VIP configuration entering the Irish helicopter market where Leonardo is pursuing further opportunities for a range of types that include the AW109 Trekker and AW169, thanks to state-of-art avionic and navigation systems along with class leading performance, safety and comfort standards for roles such as VIP transport and helicopter emergency medical service (HEMS). Irish operators can also benefit from an established and expanding in-country support presence, following the set up of a Leonardo Authorised Service Centre by Sloane Helicopters in St Angelo, Enniskillen in 2007.

This latest contract follows another major milestone achieved in the Irish market, with Sloane being selected in June to operate, on behalf of the Irish Community Rapid Response (ICRR), Ireland’s first dedicated charity funded HEMS service to be based at Cork Airport. Sloane will initially use an AW109 EMS and a dedicated in-country back up AW109 starting later this year.

“As we approach our 20th year as an established HEMS operator, we are delighted and proud to have been selected by ICRR to provide HEMS services in Ireland and very much look forward to developing a close partnership with the Charity. For over 23 years as the Leonardo distributor in Ireland and the UK, as well as being an Authorised Service Centre, Sloane Helicopters has provided helicopter in-country support for its many Irish customers and sees this scope expanding over coming years.”

The AW139 model has proven successful in Ireland with one aircraft used for private/VIP transport and six units operated as multirole helicopters by the Irish Air Corps. With this latest AW109 GrandNew sale, Leonardo is increasing its dominant position in the UK and Irish VIP/corporate market where Leonardo and Sloane have delivered 15 helicopters including the AW109, AW169 and AW139 models in the last 18 months. Leonardo maintains its leading position in the world’s VIP/corporate market in the multi-engine helicopter segment, also including private, charter and VVIP/Government transport services, for both units delivered and value outperforming competition. In 2017 global market share was approximately 50%.