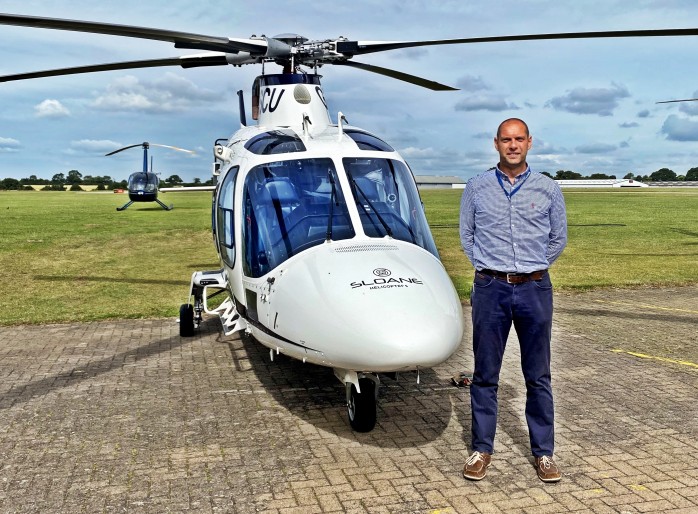 We are excited to advise that Joe Moore has officially added his role as Sloane’s Head of Training to his duties. Joe first started his piloting career with Sloane in 1990 when he learnt to fly and completed his PPL(H) in an R22.  Shortly after completing his hour building in 2000, he became an instructor and began instructing in the Sloane Helicopters Flying School back in 2001.

Over the next six years, Joe went on to add the R44 and B206 aircraft ratings to his licence, whilst also becoming a CPL, an Examiner and an Instructor for the Flight Instructors Course. During this time, he taught many of our current Flying School customers to fly; including our CFI and another of Sloane’s Instructors!

Joe then commenced his twin-engine and Instrument Rating flying the AS355 and AW109 for anther operator, before going freelance in 2009. His freelance spell included a great deal of helicopter filming and VIP charters all over the country.

In 2012 Joe re-joined Sloane Helicopters as a HEMS Pilot and Line Training Captain for Air Ambulance services and also became a Type Rating Instructor on the AW109 in 2014. Since then, Joe has become the Deputy Chief Pilot and has taken on the Crew Training Manager role within the company.

With the addition of the Head of Training role to his other duties, Joe is looking forward to bringing the Flying School and Operations departments closer together so that the Pilots of tomorrow can learn the tips and tricks from the Pilots of today.  He is also looking to getting re-acquainted with some old faces from his previous time in the Flying School and catching up with them over a socially distanced cuppa!